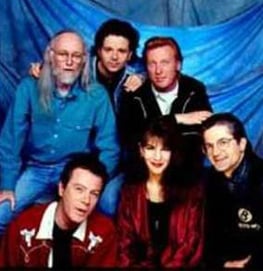 Inducted into the Canadian Country Music Hall of Fame in 2008.

Inducted into the Canadian Country Music Hall of Fame in 2008

Prairie Oyster is an award winning Country-Rock band that was formed in Toronto in 1975. The original group included three of the current members – guitarist, Keith Glass, steel guitarist, Dennis Delorme and singer/bassist, Russel deCarle. The group toured and performed in the late 1970s, but did not produce an album and subsequently disbanded in 1978 to pursue other interests.

After a brief hiatus, Prairie Oyster re-united in 1982 with the addition of a trio of new band members – keyboardist, Joan Besen, fiddler, John P. Allen and drummer, John Adames, who was replaced in 1986 by Bruce Moffet. The group drew its inspiration from different styles of music, particularly from 1950s country and rock and their southern US variants.

Prairie Oyster is an icon in Canadian music circles. Their music, both through their numerous chart-topping hits and extensive touring career, has been rocking and influencing generation of Canadians since the 1980s.

The band has received six Juno Awards, 10 CCMA Awards (highlighted by 6 ‘Group/Duo of the Year’ Awards and an ‘Entertainer of the Year’ Award), and over 35 various CCMA Awards have been presented to individual members of the band. They received a SOCAN ‘Lifetime Achievement’ Award in 2011. In addition to their extensive success on Canadian country hit charts, Prairie Oyster also scored three entries on the Billboard Country Hits Chart in the USA with their RCA releases during the 1990s.